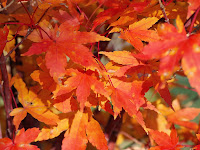 Our theme for the third week of school was "Hello Autumn!" The leaves in the mountains are starting to turn to reds and golds.

FIELD TRIP
This week's field trip was a hike up the canyon. We hiked up the Battle Creek trail due to the rock slides in AF Canyon from earlier this month. We talked about the settling of the area by the Mormon pioneers and how it got its name. (I have two ancestors who reportedly participated in this particular battle and it is a solemn feeling to think about the tragedy that occurred.) 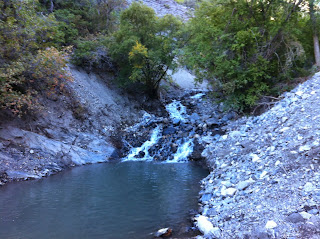 We also took our science journals to sketch the different plants and animals we found. The first animal anyone found was a black widow. How he saw it from fifteen feet away in all that underbrush is beyond me! I am so terrified of spiders that I ended up having nightmares that night that a little girl tried to pick it up and got bitten. I cropped the picture below so it looks like we are closer than we actually are :). 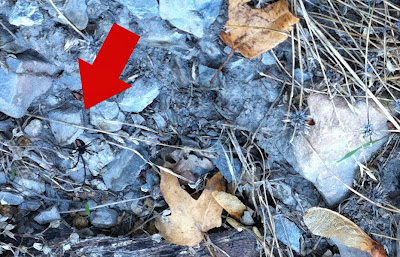 We topped it all off with a discussion about people not cleaning up after their dogs. It was chillier than I expected but still fun.

LANGUAGE ARTS
Penmanship
Here are this week’s copywork selections.We also had a discussion related to social studies on how important good handwriting is. Lewis (of the Lewis and Clark expedition) had a dog named Seaman. For over 100 years, the dog's name was reported to be Scannon because the two look similar when written and Lewis had such poor handwriting.

Spelling
In addition to the word sorts from the Words Their Way spelling program, we work on occasional "Wacky Words." This week we learned to spell AUTUMN. I made up new words to Rita Mae Olsen's song "It's Autumntime" and we fingerspell A-U-T-U-M-N as we sing the chorus.

Poetry and Literature
I reinforce our grammar lessons through poetry. We are learning about nouns and this week's poem was "What I Found in My Desk" by Bruce Lansky. By replacing the various nouns in Lansky's poem with our own words, we made up fun poems. I wrote my own sample to give some inspiration:

What I Found in My Purse
An apple with an ugly bruise,
a shoelace for my tennis shoes,
a coupon for a pecan pie,
a lipstick that I meant to try,
a flashlight for when it’s dark,
the keys I thought I lost at the park,
a Ziplock bag with Cheerio crumbs,
a broken phone that barely hums,
a driver’s test I almost failed,
a past due bill I should have mailed,
and one more thing, I must confess,
a note from myself: Clean This Mess!!!!

Composition
This week we focused on the 6+1 Writing Trait CONVENTIONS (which includes grammar). Since we are learning about nouns, we did another sorting activity. The objective is to sort words into one of two categories: nouns or not nouns. It is going to take a while understand the abstract nouns like love, religion, etc.

MATHEMATICS
To learn about the different sets of numbers (Natural, Whole, Integer, Rational, Irrational, Real Algebraic, Transcendental, Real, Imaginary, Complex, etc.) we played a sorting game. I printed and cut out various number cards (you can download them here). I set out six nesting boxes with the simple directions to "sort the number cards". In the past I have used different sized baskets but this summer I found nesting containers at Walmart that work perfectly. 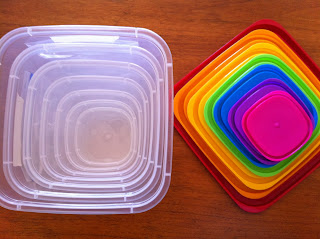 I use Ziplock bags taped inside the two largest boxes for Imaginary and Irrational Numbers. 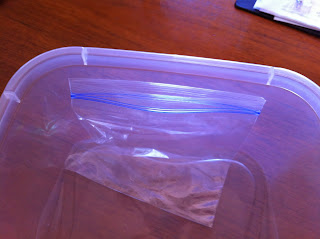 Because this activity is so similar to the spelling and vocabulary word sorts, I don't label the containers. Students look for similarities and differences in the number. It amazes me how easy it is for some kids to sort the numbers into accurate groups. There are usually a few incorrect numbers-- generally money (it can be hard to understand the details of cents vs. dollars/euros/pounds)-- and I need to help put the nested boxes in the correct order but I have found that the second time the activity is repeated, there are few, if any mistakes.

SCIENCE
This week we studied endangered Utah plants and animals and practiced science journaling while on our hike in the canyon.


HISTORY
Still focusing on Manifest Destiny, we studied Lewis and Clark (and Sacagawea) along with the details of the Louisiana Purchase (connecting to Napoleon and last week). 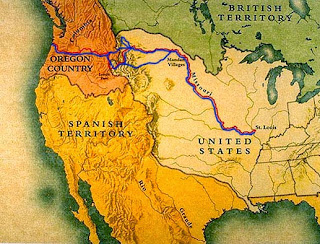 One of the things I find most fascinating is that some people believed that this new territory contained unicorns, wooly mammoths and seven foot beavers. (Kids find this fact amusing as well.)

VISUAL ART
This week we got an introduction to the Painting Center of our art studio. After a five minute introduction, everyone chooses to work in one of the three centers now open: drawing, painting or collage.

PHYSICAL EDUCATION
We went hiking this week.We also talked about types of walking- jogging, sprinting, hiking and race walking. (Race walking is an Olympic sport. Olympic racewalkers can "walk" a mile faster than I can run it. Pretty cool! Here is a video to check it out.)
at 1:23 PM